Fountain of the Great Lakes 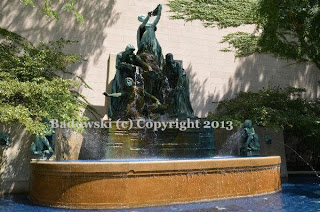 For this first work of public sculpture funded by the B. F. Ferguson Monument Fund, sculptor LoradoTaft (1860-1936) designed a towering bronze fountain featuring five female figures, “of no time nor race,” pouring water from shells as a symbol of the continuous flow of water from the Great Lakes and the St. Lawrence seaway into the Atlantic Ocean. In part, the concept was based upon his own memory of the myth of the Danaïdes, in which all but one of the 50 daughters of Danaus are convinced by their father to kill their husbands on their wedding night and are, subsequently, punished in Hades by being compelled to pour water endlessly into a vessel full of holes. Taft reduces the number of women to five, corresponding to the number of Great Lakes, and positions them in a relationship that mirrors the flow of water, from Superior at the top with Michigan on the side pouring into the basin held by Huron, who sends it to Erie. Ontario receives the water at the bottom and looks to the right (originally eastward) as it heads toward the Atlantic.
After producing two sculptural groups for the Horticultural Building at the 1893 World’s Columbian Exposition, Taft was sensitive to Chicago planner Daniel Burnham’s lament that no sculptors at the Exposition had made anything related to the natural resources of the Chicago region, including the nearby lake. The Illinois-born Taft was educated at the École des Beaux Arts in Paris during the 1880s, the school directly associated with the Greek- and Roman-inspired architecture adopted by Burnham and others for the “White City” buildings. In addition to answering to Burnham’s comment with this fountain, Taft believed it offered the kind of “enduring statuary” demanded by the Ferguson Monument Fund.
Established in 1905 following the death of wealthy lumber merchant Benjamin Franklin Ferguson, the one million dollar bequest stipulated that monies be used for the erection and maintenance of stone, granite or bronze statuary “commemorating worthy men or women of America or important events in American history.”  Rather than create a work that “represented” Ferguson in a literal sense, Taft intended the fountain to “commemorate” the donor and honor his hope that Chicago would join the ranks of major cities of Europe that featured impressive statues and fountains.
Although the Ferguson Fund was intended to be used only for public sculpture, the Board of Trustees of the Art Institute, who were charged with managing the trust, filed a complaint in the Circuit Court of Cook County and, eventually, were allowed to use the fund to erect and maintain an administrative building, resulting in a scandal amongst sculptors and other civic-minded individuals. When the Fountain of the Great Lakes was moved in 1963 from its original location on the south wall of the main building to the west façade of the new Morton wing, critics pointed out that the fountain’s new position would hide the bronze portrait of Ferguson on the back side of the work, as well as the engraved request from his will stating that the funds be used for enduring statuary and monuments.