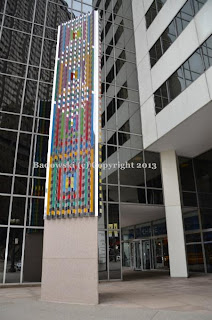 Israeli artist Yaacov Agam, a pioneer of kinetic art, was commissioned to create a sculpture for 150 North Michigan Avenue. It was dedicated in 1983 during a ceremony with Mayor Harold Washington. In kinetic style, the multi-colored work appeared to change, depending on the vantage point of the viewer and his or her movement past the piece. Over the years that followed, the harsh Chicago weather faded the sculpture and the paint began to peel.
In 2005, Jones Lang LaSalle Inc., a Chicago-based real estate firm that manages the skyscraper at that location, took down the piece and hired an expert to restore it. While Jones Lang LaSalle Inc. stated that Agam was consulted during restoration, three years later, when the piece was reinstalled after completion of the $300,000 project, the artist was less than happy with the result. He believed the colors were not restored to the exact shades he originally used and alleged that the work was not a restoration but rather an unauthorized reproduction. In an 2008 telephone interview with the Chicago Tribune, the artist stated, "The public should know that this is not a real Agam." The son of an Orthodox rabbi, Agam considers himself a "visual rabbi." He urges those who view his works to view them as "visual prayers."

UPDATE: This piece was removed and put into storage in 2018.

Email ThisBlogThis!Share to TwitterShare to FacebookShare to Pinterest
Labels: Loop and Along the Chicago River