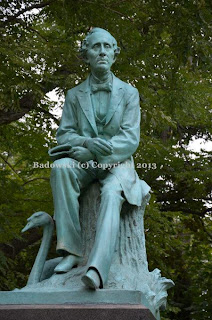 Hans Christian Andersen (1805-1875) was a Danish author best known for his 168 children’s tales, including “The Little Mermaid,” “The Princess and the Pea,” “Thumbelina” and “The Snow Queen.” The son of a poor shoemaker from Odense, Andersen hoped to become a successful playwright in Copenhagen but was not taken seriously. He began writing travelogues after a visit to Germany in 1831 and would continue producing them for the rest of his life. On a lark, he published four children’s stories in 1835, which led to the career that would bring him international fame.
Johannes Gelert, the Danish sculptor responsible for the Haymarket Riot Monument, was commissioned by a committee of the Chicago Dania Society to create this 8-foot-tall bronze statue of Andersen, seated on a tree stump atop a granite pedestal. Andersen is shown with his fingers holding his place in a book with a swan beside him, possibly alluding to his story “The Swan’s Nest,” which refers to Denmark, or “The Ugly Duckling,” given his own struggle to gain acceptance as a writer. The monument was paid for by donations, including small change given by school children.
In 1897, Gelert installed another work in Lincoln Park, a bust of German composer Ludwig van Beethoven, but it was stolen in 1970 and never recovered. In honor of the 200th anniversary of Andersen’s birth, the Chicago Park District conserved the monument and it features a vivid green patina.