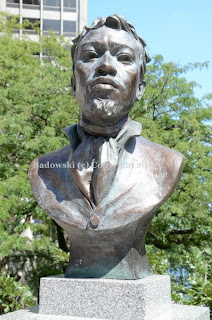 Haitian-born Jean Baptiste Pointe DuSable (1745-1818) was recognized by the State of Illinois and the City of Chicago in 1968 as the first known settler in area and the founder of the city.  In the 1770s, DuSable, a fur trader, opened the first trading post on what would later be named the Chicago River. The bust is located close to the site of the Pointe DuSable House, designated a National Historic Landmark by the United States of the Interior in 1977. Haitian-born Chicagoan Lesley Benodin donated the statue to the Chicago Public Art Collection to commemorate Chicago’s first businessman. Blome, a Chicago artist, has other works around the country and in the city, including the Chicago Blackhawks 75th Anniversary sculpture across the street from the United Center.