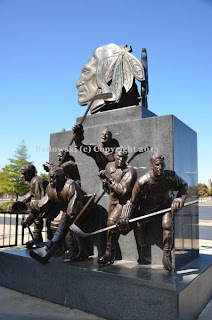 To commemorate the Chicago Blackhawks 75th Anniversary season as a member club in the National Hockey League, the team commissioned Chicago-born Erik Blome, who had created other life-size sculptures. Unveiled on October 12, 2000, the piece features six players representative of different eras of the team. The bronze players “skate” out of a wall onto stainless steel “ice.” Sandblasted onto the black granite pedestal are the names of every player for the team between 1926 and 2000.
Located in a parking lot where the famed Chicago Stadium once stood and just steps from other tourist attraction sculptures (including Michael Jordan, Stan Mikita and Bobby Hull by Omri Amrany and Julie Rotblatt-Amrany), this monument is a stopping point for many fans, some of whom have been married in front of it. Current players also have visited it as part of their pre-game ritual. Other pieces by Blome include a bronze bust of Jean Baptiste Pointe DuSable (Pioneer Court Michigan Avenue at the Chicago River northeast side of Michigan Avenue Bridge) and Michael Jordan’s father, James Jordan, (James R. Jordan Boys & Girls Club and Chicago Bulls Family Life Center, 2102 West Monroe Street). Blome’s life-size sculpture of hockey great Wayne Gretzky was unveiled in front of Los Angeles’ Staples Center in 2002.
Other works: