Man on a Bench 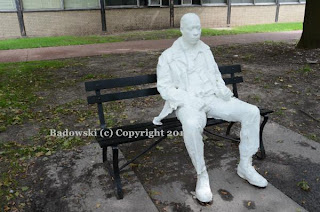 Man on a Bench, 1986
George Segal
Park 474
Near Pearlstein Hall on the campus of the Illinois Institute of Technology
3300 South Federal Street

George Segal (1924-2000) is best known for his life-like, whitewashed figures displayed in assembled environments that evoke activities of everyday life. The process involved placing bandages dipped in plaster on human models, resulting in statues that are convincingly human in scale, posture and features, but appear remote in their stillness and monochromatic presence. When Segal began casting in bronze, he maintained his signature white finish by sealing the pieces with white acrylic resin.
This work was commissioned in 1986 by the Illinois Institute of Technology (IIT) in honor of the centennial celebration of the birth of renowned architect Ludwig Mies van der Rohe, who designed the campus and many of its buildings and served the institution as program director and instructor. IIT chose Segal to create the first permanent outdoor sculpture for the campus.
The figure appears to be an African American man relaxing on a wooden bench, a sight one would expect to see on a college campus but made strange by the ghostly appearance of the statue. Funding for the work came from major donors, such as Daniel J. Terra, but also from the B.F. Ferguson Fund, which requires that the artwork be on public land. Thus, IIT deeded the nine-foot by six-foot site that contains the work to the Chicago Park District. It has the distinction of being Chicago’s smallest park.