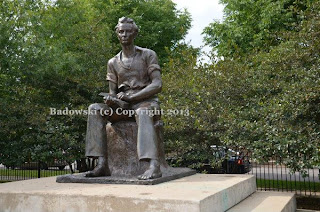 The re-designed Senn Park sits upon land that once belonged to the Kransz family and Abraham Lincoln is rumored to have stopped at Nicholas Kransz’s Seven Mile House during his 1860 campaign for president. This 13-foot tall bronze version of Lincoln, showing him as a humble, barefoot young man sitting on a tree stump with a book, was created by Charles Keck, one-time apprentice to Augustus Saint-Gaudens, the sculptor responsible for what was once voted the “greatest work of sculpture in America,” the Standing Lincoln located in Chicago’s Lincoln Park.
The Keck family donated this work to the G.A.R. (Grand Army of the Republic) collection at the Chicago Public Library, located at the time on N. Michigan Avenue. In 1997, it was loaned to the Chicago Park District so that it could be installed in Senn Park in the Edgewater community. Following the construction of Ridge Avenue in the 1960s, intended as a temporary link between Lake Shore Drive and the Edens expressway, the road widened and lengthened and contributed to a cycle of disinvestment in the area. Edgewater residents hoped to increase the green space and improve overall living conditions so they appealed to the Park District to purchase this plot, otherwise slated to house a muffler shop. Landscape architects incorporated the monument into the design for this triangular corner.