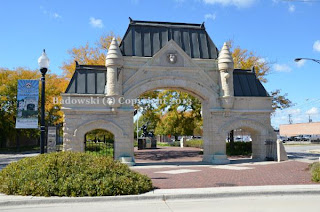 At one time, Chicago’s Union Stockyards sprawled over 475 acres and operated for more than a century as the meatpacking district. Carl Sandburg’s poem Chicago hailed the city as “Hog Butcher for the World.” Before closing forever in 1971, generations of men and women who worked in the stockyards entered through this limestone gate, designed by architects Daniel Burnham and John Root. It was designated a U.S. National Historic Landmark in 1981.
Commissioned by Superintendent of the Yards, John B. Sherman, Root even incorporated a bust of “Sherman,” the favorite prize-winning bull owned by the Superintendent, at the top of the arch. The railroad tracks that delivered livestock directly to the stockyards from the city’s main rail lines are still evident directly in front of the gate.
It has been said in its prime, the area was arguably the most odiferous spot in the city during the late 19th and early 20th centuries. Upton Sinclair’s 1906 book The Jungle revealed the horrid conditions employees—most of them immigrants—endured on the job, including 10 to 12 hours days in 100 degree summer heat and surrounded by animal stench and blood-soaked floors. Sinclair also documented unsafe working conditions, such as a man falling into a vat of lard and being processed. Investigators sent by President Theodore Roosevelt found Sinclair’s accounts to be accurate and, thus, a movement was made for pure food laws. The gate remains as one of the few visual reminders of Chicago’s supremacy in the meatpacking industry.