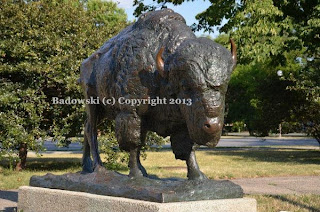 Edward Kemeys (1843-1907) worked with A. Phimister Proctor to produce more than 35 plaster models of North American wildlife for the 1893 World’s Columbian Exposition in Jackson Park. The two massive sculptural bison are visible in many existing photographs from the Exposition. In 1911, the West Park Commissioners hired Jules Bercham to recast the sculptures in bronze. They replaced Daniel Chester French and Edward C. Potter’s two Bulls with Maidens (which were moved to Garfield Park) facing the sunken garden in Humboldt Park.
The bison are similar but not identical, with one staring forward while the other has a lowered head, as if grazing or listening. Kemeys, best known in Chicago for his Lions that grace the entrance of the Art Institute, was one of the pioneers of animal sculpture in the United States.

Email ThisBlogThis!Share to TwitterShare to FacebookShare to Pinterest
Labels: Edward Kemeys, West Side