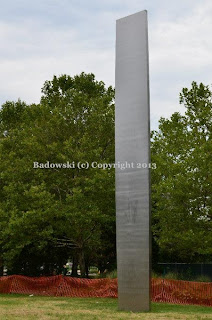 The popular title (“I Will”) of this work recalls an unofficial motto of the city of Chicago that originated with an award-winning sketch of a figure submitted by Charles Holloway for an 1892 competition. The Inter Ocean newspaper was searching for a symbol that would represent “Chicago’s restless energy and spirit” and Holloway’s drawing featured a heroic female personification accompanied by the “I Will” motto. Variations of the drawing were used in advertisements and cartoons and it inspired the central figure in Henry Hering’s relief Regeneration on the Michigan Avenue bridge house. The soaring nature of this gently curving, asymmetrical monument seems to speak, in an abstract way, to the fortitude and determination required when Chicago faced reconstruction after the Great Fire of 1871.
Ellsworth Kelly (born 1923) is a painter, printmaker and sculptor and one of the foremost practitioners of post-war abstract art. In 1973, Kelly began making large-scale outdoor sculptures in steel, aluminum, stainless steel and, in the 1980s, bronze. This 40-foot tall sculpture consists of two highly-polished half-inch thick pieces of stainless steel welded together to produce a narrow rectangle that ranges from five to six feet wide. The structure enclosed a three-inch hollow center.
This sculpture was the first to be commissioned for a Chicago park since the 1950s and Cindy Mitchell, founding member of the Friends of the Parks, led the effort. The committee received a National Endowment for the Arts grant and managed to raise more than $100,000 for the project. Kelly did not accept a fee for his design and Paschen Construction donated its services in building the foundation and installing the monument. At the dedication on November 8, 1981, Kelly explained that he had watched the busy intersection, bustling with joggers, bicyclists, parents with strollers, and drivers and he selected a form that they could take in without breaking their pace.