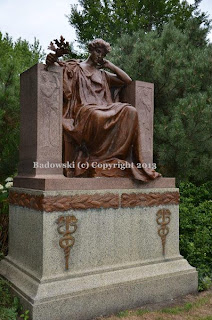 At one time the wealthiest man in Chicago, Marshall Field started out as a store clerk but became a partner in Potter Palmer’s dry-goods store in 1865. Upon the departure of Palmer and the buyout of his partner Levi Leiter, Field established Marshall Field & Company, which would become the largest wholesale and retail dry-goods enterprise in the world. In his will, Field allocated $8 million to build a home for the Field Museum of Natural History on the Museum campus in Grant Park.
Chicago sculptor Lorado Taft described Daniel Chester French’s sculpture as “genial, sympathetic and dignified” and his bronze, female personification of “Memory” emanates an air of melancholic solemnity and strength. The setting, with surrounding trees and bushes and a reflecting pool, was designed by Henry Bacon, frequent collaborator with French on projects, including the Lincoln Memorial in Washington, D.C. The monument features carved panels of male figures labeled as “Equity” and “Integrity.” The female figure holds oak leaves, symbolizing courage in the face of death, and the granite plinth features the caduceus, the staff carried by Hermes/Mercury, god of commerce.
Marshall Field (1835-1906) is not named on the monument itself but he, his family and his descendants are identified with a row of simple headstones placed at some distance from the statue and pool of water.