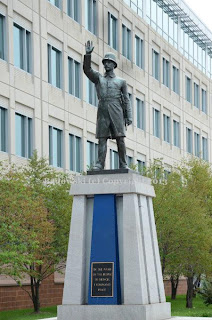 This work was commissioned in 1888 by a committee of 25 businessmen and civic leaders to serve as a memorial to the police officers who died during the events of May 4, 1886 at Haymarket Square in Chicago. It was Danish sculptor Johannes Gelert’s first major commission.
In the midst of the national movement for an 8-hour workday, a rally was held in Haymarket Square on May 4, 1886 to support striking workers at the nearby McCormick reaper plant. The assembly was peaceful and Mayor Carter H. Harrison advised police not to intervene. When the rhetoric heated up near the end of the rally, however, 176 officers marched in and ordered the crowd to disperse. A bomb was thrown and one officer, Mathias Degan, was killed instantly. Police responded with gunfire and seven more officers (and an undetermined number of civilians) were killed that evening with 60 officers injured.
The melee resulted in hundreds of arrests and, eventually, eight anarchists were charged with “inciting the act;” all eight were convicted and seven were sentenced to death. Four were hanged on November 11, 1887, one died in prison and the other three were given complete pardons by Governor John Peter Altgeld in 1893, due to the lack of credible evidence from the conspiracy trial.
Public opinion toward the police actions and the behavior of the protestors has always been divided and this memorial has had its own tumultuous history. Originally erected in Haymarket Square in 1889, it was declared a traffic hazard in 1900 and moved to Union Park. In 1927 (on the anniversary of the events) a streetcar crashed into the statue and it was subsequently moved to another section of the park. In 1958 it was returned to the Haymarket area (near the Kennedy expressway) and it was granted Landmark status in 1965. In October of 1969, however, the life-sized, bronze statue was blown off of its pedestal by dynamite, restored, and then damaged again by explosives in 1970. In 1972, it was relocated to the lobby of the old Chicago Police headquarters on State Street. In 1976, it was placed in the atrium of the Police Academy away from public view. In June 2007, after being refurbished and provided with a new pedestal by Mike Baur, the statue was installed outside of the Chicago Police Headquarters on Michigan Avenue.
Although the artist’s initial design featured an allegorical female figure of “Law,” the committee requested a more down-to-earth representation and the statue is intended to represent Capt. William Ward, who called for the crowd to disperse. Gelert modeled his figure after a policeman he saw directing traffic. Conversely, the Haymarket Martyrs’ Monument (1893), located at the grave of five of the convicted anarchists in Forest Home (Waldheim) cemetery in Forest Park and designed by Albert Weinert, does include an allegorical female form, understood as either “Justice,” “Anarchy” or “Revolution.”