The Sun, The Moon and One Star (Miro’s Chicago) 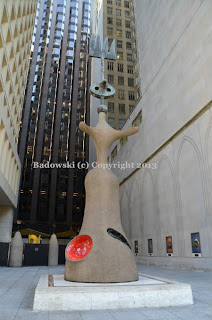 Her shape and pose reminiscent of the famous Minoan snake goddess figurine from Crete, Miro’s Chicago is a 39-foot tall stylized female form fashioned from steel, wire mesh, concrete, bronze and ceramic tile. Placed in a small plaza between the Chicago Temple and the George W. Dunn Cook County Office Building, the statue faces the famous Picasso sculpture in Daley Plaza. Originally to be installed the same year as Picasso’s work, the plan was abandoned, due to financial issues, by the Brunswick Corporation, which commissioned the piece.  It remained a small maquette until a committee, led by Stanley Freehlin, raised over half of the necessary funds from private donors and the City of Chicago contributed matching funds. The finished figure was unveiled on April 20, 1981, by Chicago’s first female mayor, Jane Byrne.
Joan Miró (1893-1983) was a Spanish Catalan artist who worked in a variety of media, including ceramics, sculpture, painting and printmaking. In 1920 he traveled to Paris, where he met Picasso, participated in Dada activities, and was noticed by André Breton and the Surrealists. During the 1930s, he worked with found objects and chance compositions in sculptural constructions that sought to capture a sense of the magic of simple, everyday things. His paintings, often featuring black biomorphic shapes, seem to reveal an inner universe of personal yet potentially universal symbols.

Email ThisBlogThis!Share to TwitterShare to FacebookShare to Pinterest
Labels: Loop and Along the Chicago River