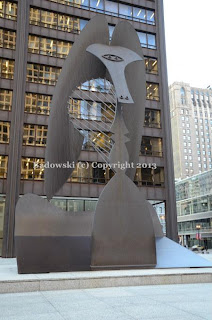 Representing a major step in bringing contemporary art into a civic space, The Picasso was unveiled on August 15, 1967 to equal amounts of fanfare and skepticism. Thousands attended the dedication, which began with the first-ever outdoor performance by the Chicago Symphony Orchestra and included a reading by Pulitzer Prize-winning poet Gwendolyn Brooks. Mayor Richard J. Daley pulled the white ribbon that removed the blue covering and presented the crowd with the 50-foot tall, 162-ton steel work by Pablo Picasso (1881-1973), an artist who had never visited Chicago. The sculpture would go on to become the most recognizable icon of the city.
Some observers, however, were not immediately receptive. Col. Jack Reilly, then-director of special events, remarked, “If it is a bird or an animal, they ought to put it in the zoo. If it is art, they ought to put it in the Art Institute.” 47th Ward Alderman John J. Hoellen argued that such an abstract work was “out of place in Chicago” and suggested it be replaced with a monument to Mr. Ernie Banks. Described by some viewers as an “Afghan hound,” “baboon,” “butterfly wings,” and even “a cow sticking out its tongue at Chicago,” the sculpture is most likely based upon a female head that Picasso was working on from 1962. Its simplified forms, use of industrial materials, interplay of solid form and shaped spaces, and its stubborn ambiguity are hallmarks of modernist art.
In the early stages of the project, William E. Hartmann, senior partner in the architectural firm Skidmore, Owings and Merrill, traveled with two colleagues, C. F. Murphy and Norman Schlossman, to Picasso’s home in southern France in an attempt to persuade “the greatest artist alive” to design and build a model for the work. The 42-inch miniature was completed in May 1965 and the American Bridge Division of the U.S. Steel Company in Gary, Indiana fabricated the sculpture. The $300,000 cost of construction was provided by the Woods Charitable Fund, the Field Foundation of Illinois and the Chauncy and Marion Deering McCormick Foundation.

Email ThisBlogThis!Share to TwitterShare to FacebookShare to Pinterest
Labels: Loop and Along the Chicago River, Pablo Picasso