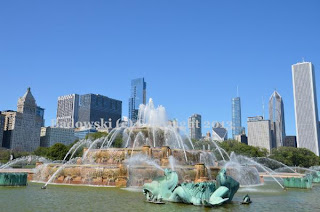 Ohio-born Kate Sturges Buckingham was brought to Chicago as an infant and lived a privileged and sheltered life.  Her family’s wealth came from the grain business as well as banking, steel and real estate. At age 32,  after her mother’s death, Kate took charge of the family money. Interested in the arts, she began an association with the Art Institute and gifted the museum a number of works. Her brother, Clarence was an avid art collector and was a trustee and former director of the Art Institute of Chicago. When Clarence died in 1913 his estate, valued at $1.5 million, was left to Kate and their sister Lucy Maude.
As a tribute to her brother, Kate gifted the $700,000 Buckingham Fountain to the city. In 1925, Bennett Parsons & Frost architects were hired to design a fountain that was compared to the Latona Basin in Louis XIV’s garden of Versailles, but twice the size. Edward H. Bennett (1874-1954), in collaboration with French sculptor Marcel Loyau and engineer Jacques H. Lambert, created the park’s focal piece without obscuring a view of Lake Michigan. Completed in 1927, 50,000 people attended the dedication on August 26 that included John Philip Sousa conducting the band that played his “Stars and Stripes Forever.”
The largest decorative fountain in the world at the time of its dedication,  it produces a major display every hour on the hour for 20 minutes and the center jet shoots water 150 feet into the air. There are 133 other jets:
The water displays are powered by three pumps:
There are four basins clad with carved granite and pink Georgia marble. The bottom pool of the fountain is 280 feet in diameter, the lower basin is 103 feet, the middle basin is 60 feet and the upper basin is 24 feet.  The 1.5 million gallons of water are re-circulated from the base pool after the basins are filled.
Marcel Loyau studied the sea horse collection at a zoological institution in Paris in order to properly create the four pairs of bronze Art Deco sea horses in the lower basin. They represent the four states that border Lake Michigan. Loyau was awarded the Prix National at the 1927 Paris Salon for the fountain’s sculptural elements.
Per Kate Buckingham’s vision of “soft moonlight,” numerous light technicians worked to test various glass filters, colors and electrical current to create an ethereal, mystical aura. There are 820 lights in the fountain.  Until 1979, the fountain was manually operated by two engineers who each worked 12-hour daily shifts in a sunken control room near the iconic fountain. Fully computerized in 1980, the computer was located in Atlanta, Georgia from 1983 to 1994. It is now located on site and with a monitoring system in Arlington Heights, Illinois.

Email ThisBlogThis!Share to TwitterShare to FacebookShare to Pinterest
Labels: Millennium and Grant Parks