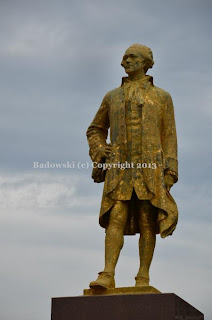 Philanthropist and art patron Kate Sturges Buckingham (1858 – 1937) , best known for her donation of the Clarence F. Buckingham Memorial Fountain to the city, considered Alexander Hamilton “one of the least appreciated great Americans.” It was her belief that the first Secretary of the Treasury was responsible for securing the nation’s financial future, hence making it possible for her family to make its fortune in grain elevators and banking.  In 1928, she established a fund and pledged $1 million to the Chicago Park District with the intent to create a memorial honoring the founding father.
Hired to sculpt the figure was New York artist John Angel (1881– 1960), one of the most prolific and highly regarded sculptors of the day. Finnish architect Eliel Saarinen  (the architect whose entry for the Tribune Tower competition of 1923 was widely viewed as the best, despite Hood and Howells winning the commission) was brought on to create an architectural setting for the monument. However, his proposed shelter with 115-foot columns was not well received.  Buckingham, fearing the statue of Hamilton would be lost within the structure noted it, "shouldn’t look like a modern skyscraper.”
By the time of her death in 1937, with at least $41,000 already spent on the project, the sculpture’s setting and location were uncertain. Her will directed the trustees of the Alexander Hamilton Trust Fund to complete the project and, if it was not completed with 10 years, the monies would go to the Art Institute. In 1943, a lawsuit was filed by the States Attorney for Cook County accusing the committee, which included two directors at the Art Institute, of purposely slowing the project. The judge in the case put a moratorium on the project until the end of the ongoing war. The courts later ordered the project to be completed by 1953. The trustees decided to gild the bronze statue that had been put into storage four years after Buckingham’s death and hired architect Samuel A. Marx (1885– 1964) to create a new granite setting for a site in Lincoln Park.  On July 6, 1952, 24 years after Buckingham made the original offer, the monument was finally installed. The gilded sculpture sat on Marx’s 78-foot-tall cantilevered granite exedra until 1993. At that time, flaws were found in the structure that made it unsafe and required demolition.  The re-gilded statue now sits on the only remaining element of the original structure, a red granite base.
Additional works by Angel can be found on the Cook County Courthouse as well as St. Patrick’s Cathedral in New York City and the Shrine of the Immaculate Conception in Washington, D.C.