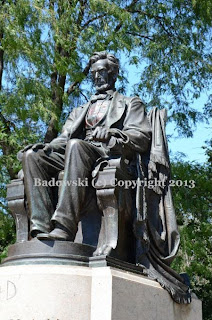 Depicting a deeply thoughtful and isolated leader, the work commonly described as the “Seated Lincoln” is the second portrait of the sixteenth president located in Chicago completed by sculptor AugustusSaint-Gaudens. Although the “Standing Lincoln” in Lincoln Park is better known and more critically acclaimed, the sculptor believed this one more successful, as it worked on the level of official portrait (and is sometimes confused with the Lincoln Monument in Washington, D.C. by Daniel Chester French) as well as expression of personality.
The statue was funded by a generous $100,000 bequest from wealthy railroad manufacturer John Crerar. His will set aside money for a free public reference library and a colossal statue of Lincoln to be placed in front of the building. The site chosen for the library, at Michigan and Randolph, did not allow enough space for the statue. Upon its completion, the statue was exhibited at the Metropolitan Museum of Art and then stored for years, displayed at the 1915 Panama-Pacific Exposition in San Francisco and, subsequently, shipped to Chicago and stored in a Washington Park warehouse until the location in Grant Park was completed in 1926.
The bronze figure and chair sit atop a granite pedestal in the center of a 150-foot wide exedra flanked by two 50-foot tall fluted columns with carved torches as finials. Stanford White, the architect who collaborated with Saint-Gaudens on his “Standing Lincoln,” designed this setting. Although the South Park Commissioners in charge of the project hoped to add a George Washington monument to mirror the Lincoln in the so-called “Court of Presidents,” the plan was never realized.

Email ThisBlogThis!Share to TwitterShare to FacebookShare to Pinterest
Labels: Millennium and Grant Parks