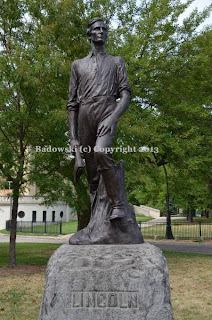 In contrast to other portraits of Abraham Lincoln in Chicago, many of which emphasize the burdens of leadership during war and crisis, this image depicts a young Lincoln in work clothes, sleeves rolled up and ax in hand. A poor man’s son from Kentucky, Lincoln described, in autobiographical writings, his experiences as a hired laborer who mauled rails and worked on a flat boat before he entered politics. A powerful symbol of upward mobility, rising from a log cabin to the White House, Lincoln’s own life story contributed to his opposition to slavery, since slaves were in a lifelong condition of bondage that did not allow for such any such improvement in their lives.
Described as a “pleasing rather than great work of art,” Mulligan’s Lincoln is not as accurate in terms of facial structure and lankiness as the statues by Augustus Saint-Gaudens but the latter sculptor did take advantage of the life mask and castings made by Leonard Volk. Mulligan created another depiction of the sixteenth President for Pana, Illinois, entitled Lincoln at Gettysburg, and a replica may be viewed at Oak Woods Cemetery in Chicago.

Other works by Mulligan:
Other statues of Lincoln in Chicago: