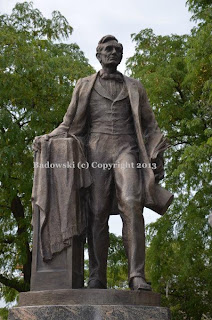 Concerned about the lack of a figurative monument to the sixteenth President near a square named in his honor, Alderman John Hoellen of the 47th Ward proposed the idea for a statue at this site and it was approved under Governor William G. Stratton and funded by the Illinois legislature. Utah-born, Yale-educated sculptor Avard T. Fairbanks was chosen to depict Lincoln and he decided upon an image that captured him at the height of his Illinois political career. He is shown beardless, as he would have been at the time, holding his signature stovepipe hat in one hand and gripping a podium with the other. The base includes a quote from a speech delivered in Chicago on December 10, 1856: “Free Society is not, and shall not be, a failure.” Fairbanks was attentive to the accuracy of Lincoln’s proportions, mannerisms and costumes but, more importantly, he hoped the bronze statue would convey the internal struggle and tension felt by Lincoln as he aspired to the Presidency. Another portrayal of Lincoln, known as Lincoln, the Friendly Neighbor, is displayed near Lincoln School in Berwyn, a western suburb of Chicago.