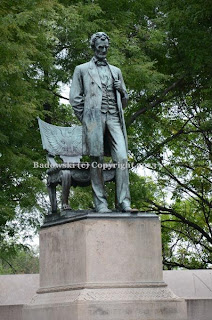 Considered by many to be not only the finest portrayal of the sixteenth president but also one of the best examples of monumental sculpture in the United States, the work typically described as the “Standing Lincoln” was created by Irish-born American sculptor Augustus Saint-Gaudens (1848-1907). The artist based his depiction upon a six-foot-four farmer from Windsor, Vermont and the plaster life mask and casts of Lincoln made in 1860 by sculptor Leonard W. Volk in his Clark Street studio in Chicago.
This monument was funded by a $40,000 bequest in the will of lumber merchant Eli Bates that called for a Lincoln statue in Lincoln Park. Saint-Gaudens was chosen after he refused to participate in a design competition for the project and all other applicants were eliminated. The artist had seen Lincoln during his campaign in New York and would later view his body lying in state. At the unveiling on October 22, 1887, approximately 5000 people stood in the rain to watch Abraham Lincoln’s grandson pull the rope to reveal the statue.
The nearly 12-foot tall bronze figure stands before a claw-legged chair inspired by a cast of a seat from a Greek theatre at the Boston Museum of Fine Arts. Sculptor Lorado Taft admired the work and described the chair as “an ingenious device” that helped to reinforced the silhouette of the figure from a distance but seemed to disappear once the viewer came closer and focused upon Lincoln’s naturalistic pose and expression. Saint-Gaudens apprenticed as a cameo-cutter in New York and later trained at the École des Beaux-Arts in Paris. Here he combined his technical skill with an innovative approach that departed from the Neoclassical convention of classical garb and idealized figures.
The figure and chair are mounted on a semi-circular pink granite exedra designed by Stanford White of McKim, Mead and White. The base includes inscriptions from Lincoln’s speeches and he appears to have arisen from his chair to deliver one of them. Replicas of this famous statue are located in London, Mexico City, New York, Boston and on the farm near Hodgenville, Kentucky where Lincoln was born.

Email ThisBlogThis!Share to TwitterShare to FacebookShare to Pinterest
Labels: Augustus Saint-Gaudens, North Side