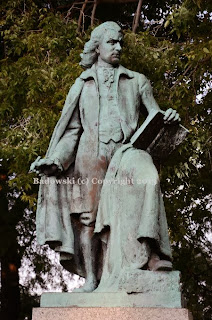 This realistic bronze portrait of the German dramatist and critic Gotthold E. Lessing (1729-1781) was funded by the bequest of Henry L. Frank (1830-1926), a German-born Chicagoan who also ensured that the bequest of his uncle, real-estate developer Michael Reese, be used for the establishment of the famous Michael Reese hospital on the South Side (closed since 2009). Lessing, who directed the National German Theatre of Hamburg (1767-1770), was credited with revitalizing German theatre and his fierce opposition to religious intolerance and philosophical dogmatism, as evidenced in his 1779 drama Nathan der Weise, would have been attractive to Frank, an avid supporter of literature and theatre and enemy of anti-Semitism. Students of the visual arts will know Lessing as the author of the Laokoön (1766), which established a philosophy of aesthetics based upon the spectator’s interest and reflected upon the means by which works of poetry and the plastic arts created that interest.
Polášek was particularly pleased with the placement of this piece, given its location in a sunken rectangle that was protected from the street by shrubbery but still allowed the figure, who faced west, to enjoy most of the day’s sunlight. The artist was trained as a woodcarver in his native Czechoslovakia and he often carved the models for his bronze statues from wood. He headed the sculpture department at the School of the Art Institute of Chicago from 1917 until 1943.